The month of April is regarded as the grandest for Thais. Aside from the intense heat of summer, this is the month when the well-known “Songkran Festival“. Songkran is Thailand New Year celebrated. Bangkok, the capital city of Thailand, has a normal number of passersby during ordinary days. However, when the 13th day of April comes, the backpacking district, Khao San Road becomes impassable because of the thousands of people including natives and travelers who arrive in the place to join the celebration.

Although the festival is done in the whole country, it still varies from region to region. In every region, there are featured head turning events that even other nationalities appreciate. Yet, if there is one common thing to be seen in Songkran festival, that would be the water fight. 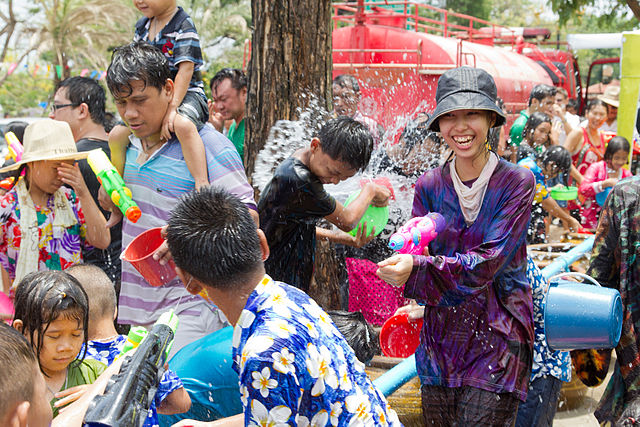 As far as the history is concerned, this is the longest water throwing event in the world as this is being celebrated for three consecutive days – starting April 13 to April 15. Just in case you are in Thailand in Songkran 2020, don’t be surprised to see people carrying containers and throwing water to others. Even children are not exempted to get wet during the said event. Like adults out there, children are also equipped with their water guns and do the same ritual.

In spite of being a fun event, Songkran festival also focuses on enriching religious intentions. A day after the event, while men are busy working, housewives dedicate their time in cleaning just every mess at home for they believe that it is a good luck for the present year. Along with this, they also wash every Buddha image in their houses, pay a visit to monasteries and offer food to monks.

For those who have no idea about the event, Songkran is the counterpart of New Year that is being celebrated in western countries. Thailand, similar to other nations, is also divided into regions and when it comes to Songkran celebration, there are highlights in every region that everyone shouldn’t miss when visiting the place. Actually, there are top five places to visit during the festival such as:

Situated in the heart of Thailand, Bangkok also top favorites of Songkran Festival. The water fights will be held in various spots around Banglamphu, most notably Khao San Road, Rattanakosin Royal Square, Phra Athit Road, Santhichaiprakan and Wisut Krasat. There will be plenty of action so remember to bring along your bucket or water pistol! You should also leave any valuable electronics at home or in your hotel as there is a very high chance that they could get damaged from all the water being thrown around. Simply place some money into a waterproof bag and then head on out to enjoy the fun.

Chiang Mai, the Rose of the North, is renowned for one of the grandest Songkran celebrations in Thailand. Visitors can take part in the opening ceremony for the Songkran Festival with a wonderful parade around Chiang Mai city. They can also go local and pour some jasmine-scented water on a Buddha image and elders, enjoy Lanna-style cultural performances and traditions, and try out various northern foods along the streets.

Pattaya is topographically situated in a place surrounded by rice crops. For them, Songkran festival is celebrated to ask for rain especially that planting days is nearly to come. There is a parade in the city during the day of the celebration. It will end up to the Beach Road where cultural events are to be shown. However, the grand finale also ends up with the water fight event. Being in the place, you might get surprised that a pail of water could be thrown to you. Thus, you should have your own water cannon to protect yourself.

After the disaster that happened several years ago, Phuket still joins the praise of good luck in the 2020’s Songkran festival. Apart from the refreshing soak from barrels, water guns and buckets, folks in Phuket visit their family members and offer a prayer. Plus, they add Thai fragrance to their water and use it to clean their houses, Buddha images and household shrines which they believe is good luck.

Visitors can join in a communal Thai New Year merit-making ceremony, witness a procession of Phra Phuttha Sihing Buddha images along Patong Beach, and pay homage to elders with scented lustral water. A range of events will be held at Loma (Dolphin) Public Park and the port, and the Jungceylon activity plaza overlooking Patong Beach.

Situated in the heart of Northeast Thailand, Khon Kaen has brought lots of surprises this Songkran festival 2020. Being known as the “Sticky Rice” capital, the city also has several forms of entertainment to be awaited such as the parade of decorated ox carts, food fair, Petanque competition and many more.

Whether for fun, for religious worship or for any purpose, Thailand has lots of hidden things waiting to be discovered. The scenic views, the rich tradition, friendliest people and extraordinary dishes all are combined to put a smile on everyone’s face. However, it’s not just enough to read about their culture. In Songkran festival, you are invited and always welcome to join the water splashing phenomena.  April is just a few months away. Grab this opportunity before you run out of time!